My least favorite thing about diabetes is the low blood sugar.

This is my husband 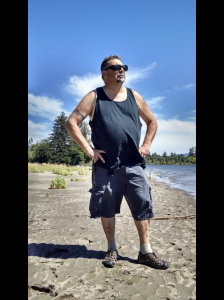 This is my husband with a low blood sugar

The difference may be so subtle that many people wouldn’t even notice. I don’t like this picture. It is a reminder of the time that I was so focused on something else that I didn’t notice he was not “right”. Usually I can look at him and tell by his stance, the look on his face, the way he holds his hands, and the way he talks to me. On this day, I completely missed it, and he had to bring it to my attention. A few days later I was looking through the pictures I had taken and it was as clear as day.

According to WebMD, symptoms of a low blood sugar include:

I normally have a sixth sense when it comes to my husband and his blood sugars. I called him from work a few years ago and knew he had a low blood sugar. I was too far away to help in a reasonable amount of time, so I called the paramedics.

Low blood sugars can be caused by too much insulin, too little carbs, and exercise. It happens when the body does not have enough glucose in its blood stream.

I asked my husband what it is like to have a low blood sugar. He said that for him, low blood sugar leads to confusion, exhaustion, and feeling like it is extremely difficult to move. I looked at him and smiled. “That explains the time you kept telling us your feet were glued to the floor”. He said that is exactly what it feels like, as if he is slogging through mud and it takes all of his strength and effort to lift his feet one more time. I asked if he knows that he is having a low blood sugar. He said “Sometimes, but it’s like I am in an alternate world. I know that’s what it is, but I can’t figure out what to do to take care of it.” He also said that diabetes likes to trick the brain. His body feels off, but his brain keeps telling him he is okay.

My daughter says that the scariest time for her was a day we were at Goodwill. My husband was shopping with the kids elsewhere in the store. I hadn’t seen him for a while. My daughter came up and said “Something is wrong with daddy”. It was very crowded and I had a hard time finding him. When I did, he was staggering like a drunk. I found a chair and sat him down. We had been at Target prior to Goodwill and I just happened to buy an orange juice. I had taken a sip of it, then put it back in my purse. His blood sugar was so low that the bottle didn’t help much. I grabbed a bottle out of their cooler and gave that to him. We’ve had to do this a few times over the years, and I do it knowing that I could risk making an employee angry. I don’t care. 🙂 Sometimes, like that day, a low blood sugar comes on so quick that he doesn’t have time to react to it.

Night time is the worst, because it is generally 8 hours of untreated diabetes. If you are resting, you are not testing your blood sugar. Lucky for my husband, I don’t sleep. Okay, I’m kidding. I do wake up several times a night to check on him though. I don’t always check his blood sugar, but I make sure he is breathing and not sweating. When he is sleeping, I can predict a blood sugar by the way he breathes and if he is sweating. A low blood sugar sweat does not present itself in the same way as “this room is way too hot” sweat.

I wish that people who know he has diabetes understood better the signs and symptoms of a low blood sugar. Last week, I made a spur of the moment decision to visit him at work. I didn’t tell him I was coming, I showed up. When I walked in, he was glad to see me, then he said “I’m not doing well”. He sat down and tested his blood sugar. It was 32. (anything less than 70 is considered low, although he is much more functional at 67 than he is 32) Even while he was treating his low blood sugar, his co-workers were talking to him, asking him questions, and trying to push him out the door for lunch.

If my husband has calculated his carbs and his insulin amount, he can’t decide halfway through that he just isn’t hungry anymore and skip eating the rest of his meal. Since he has already dosed for the entire meal, he’s kind of stuck eating the entire meal. It’s pretty inconvenient.

Have you ever seen someone with a low blood sugar? Do you know how to treat it? The general consensus is 15 grams of fast acting carbs and retest in 15 minutes. I’m official. I have glucose tablets in my purse at all times.